It’s all about the balance. In this case how balanced your carburettors are.

Early on I realised my Bandit engine wasn’t running quite right, but I mistakenly believed it was caused by less easily or cheaply fixed issue’s than carb balance. My belief went back to when I had gotten the bandit 600 and what I had seen when I went at it. It had been left parked up for quite a few years with all it’s fluids still inside including the petrol. Modern petrol goes bad quite quickly and when all that can evaporate has evaporated then you are left with a pretty hideous looking (and smelling) sludge which clogs every tube and fuel route throughout the fuel system. Just look at the state of the inside of the fuel tap when I opened it. 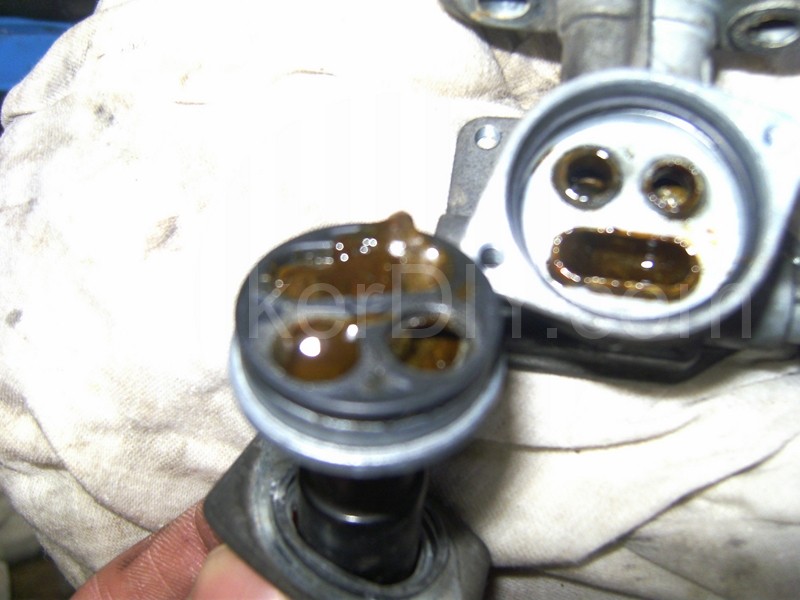 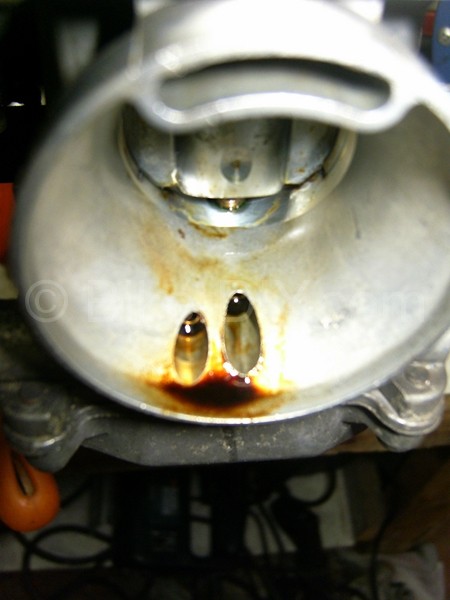 There was also a solid varnish left everywhere the fuel normally went throughout the carbs.

Although I had put my best efforts into clearing this mess out of the system, I always felt I just hadn’t quite fully cleared the slow speed tubes of some of the carb’s. And because of this belief I was willing to blame my engines ropey performance at slow and idle rpms on these partial blockages. This poor performance showed itself as missing on one when the engine was cold and hunting of the engine from 900rpm to above 1400 rpm when at idle. I also found that often when I gave it anything more than the gentlest of throttle twist from idle it would just cut out on me instead of the expected power increase. This tended to make setting off from standstill (especially while turning) a little adventure all of it’s own. This was the slightly less than amusing outcome of one such little slow speed (miss)adventure.

Then a buddy of mine, bought a Carbtune unit for himself so that he could check out his own bikes carb balance. He suggested that he call around and we both have a go at checking/balancing my bandit’s engine with his new gadget. I saw no downside to my bike being a guinea pig and as it happens I am very very glad we did it. It transformed the engines behaviour at low rpm’s entirely. If only I had done it a couple of weeks earlier I might have saved myself and my pride some pain. If your multi carb bike is messing you about at low rpms I definitely recommend getting the carbs balanced or better yet do it yourself. With DIY in mind (obviously) here’s a description of what we had to do to achieve these wondrous results… 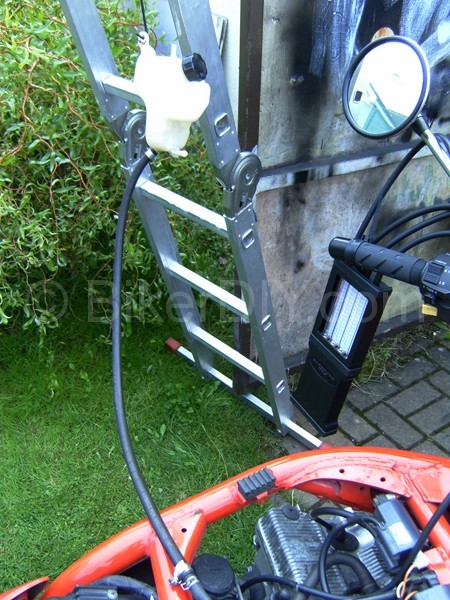 First move is the petrol tank has to come off and an alternative fuel supply that doesn’t get in the way of your access to the top of the carbs needs to be plumbed in. As it happens I use a spare coolant tank from an rg125 but there are loads of pro and diy temporary fuel tank options available. I keep meaning to order one just to have a handy shut off valve in the line but in the end the coolant tank works just fine for the number of times I use it. BTW note in the picture the carbtune comes with a handy tie clip arrangement specifically designed to hang it from a handlebar grip.

Before you lift the tank you should  be aware that there are 2 hoses connected to the petrol tap on the 1995 model bandit 600, one is the fuel line and the other (smaller) pipe is a vacuum line which runs to behind one of the carbs (usually number 4 but any carb can be connected). The point this vacuum hose connects to is in fact one of the connection points to be used for the carbtune but it needs to be temporarily closed off for now so that the engine can’t draw air in through it when warming up. There is also an overflow pipe underneath the right hand side of the tank near the saddle end which while only pushed on can still hamper lifting the tank clear, you should disconnect this pipe as soon as you can lift the tank a little to get at it.

Once the tanks clear and the alternative supply is connected you should start the engine to warm it up and you should at this point set the idle screw to about 1750 rpm. Before connecting the carbtune up it’s good practice in my opinion to ensure each column on your Carbtune is reading the same. You can do this by picking any one carb and with the engine running at idle connect each of the four tubes one by one to this same point to ensure that all 4 columns give the same result. The Suzuki recommended version from the workshop manual apparently comes with little adjustable restrictions to correct any imbalances between columns but the carbtune unit we have doesn’t come with any. This wasn’t an issue for us because each column reads the same when tested (I’m guessing carbtune are so confident of repeatable accuracy that there is no longer need for “user serviceable parts inside”.

Once we connect each of the four tubes to a carb of their own we can get our first view of the state of balance between them. In this case we connected the tubes one by one according to the left to right order of the carbs, so the furthest left column was connected to carb 1 (furthest left of engine) through to the furthest right column which was connected to carb 4. And here is what we saw on the carbtune when we started the engine and before any adjustment. 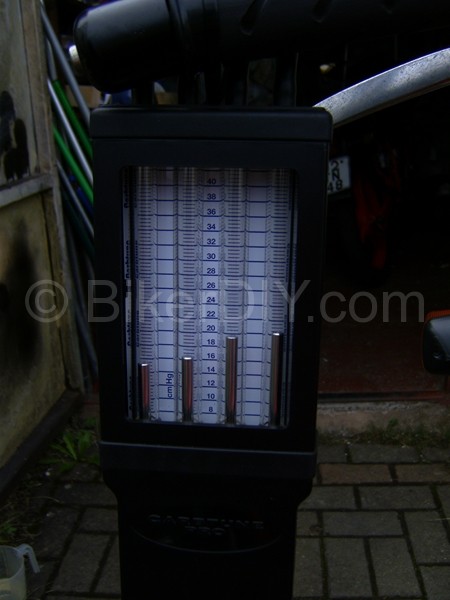 We had at the highest, no 4 carb coming in at an average of 20 cmHg and the lowest being no 1 at an average of about 15 cmHg. I say average because the columns weren’t really giving steady readings, each column could vibrate by maybe 2 cmHg and with the engine hunting as well, all four columns together could easily rise and fall by another 2 cmHg on top of that.

Note. I have no idea if these are normal values for a Bandit 600 engine of my machines age and mileage or even do they vary much between engines/milages but most relevant here was that there was an imbalance between them and that was what we were about correcting on this visit, so on to the adjusting of the carbs part of the event.

Correcting the balance between carbs comes down to adjusting 3 specific screws relative to each other. Which order you adjust these in is pre ordained by how the 4 carbs are mechanically interlinked back to the idle set screw and throttle. Here is a top down picture of the carbs to show you where the screws are and the order we followed.. 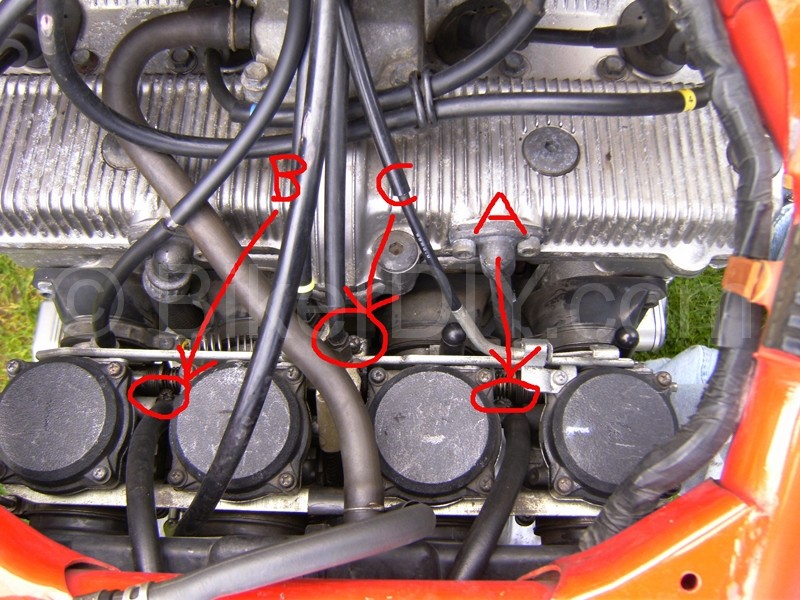 It didn’t take too much adjusting to get a balance, but what we did find while doing this was it’s best to have a long shafted Philips screw driver which fits properly. A long shaft keeps your hand free from snagging tubes and cables while you turn the screw’s and watch the carbtune indicator, and a correctly sized screwdriver means you aren’t having to push down on the driver to secure purchase as pushing down on the screw head artificially and temporarily changes the balance of the carbs which will throw your carbtune readings while your adjusting and make finding the right setting more difficult. 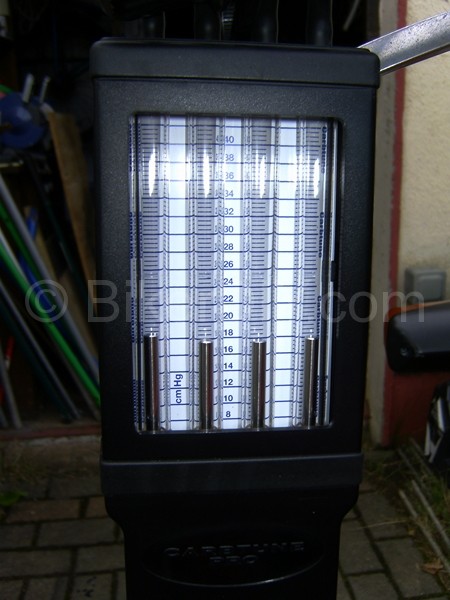 Repeat as necessary until a good even balance has been achieved across the 4 channels.

My buddy tells me he read on the internet (so it must be true 🙂 ) that + or – 1cmHg across the four is a good target (for the bandit) and that’s what we believe we achieved but not much better than that either, no matter how hard we tried. As the video at the end of the page will show there is quite a bit of movement in each reading which still pictures can’t convey, so in the end you must judge the average reading yourself.

And that’s it done bar setting the idle back to about 1,100rpm which should be easier now as the hunting should be gone. Remember to return the 3 rubber caps to their vacuum test point’s and there are 3 hoses involved in reconnecting the fuel tank.  After that take it for a spin. If it is as successful as mine then you will be just as surprised as I was to discover a completely transformed engine response at low rev’s. Not for the first time, I am well pleased. 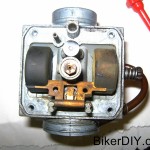 Feckin’ fiddly job this.   The carburetor had to be cleaned up a bit when I first got the bike just to get the engine to run, so I reckoned it could do with a proper deep cleaning to be sure of running right and […]