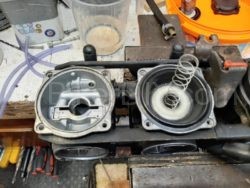 So, I had a problem. My Bandit 600 engine was running really fast at idle once it was warmed up.

And when I say fast, I mean while stopped at lights, instead of a nice low growl at a respectable 1100-1200 RPM, I had a maybe 3000-3500RPM clutch hovering GP racer wanabe kind of thing going on.

It also seemed to splutter a bit at small throttle opening, something I would liken to an engine that was over fueled. However I’m not saying it was overfueled as it seemed to run fine otherwise and it wasn’t costing anything more at the pump.

So one weekend I set to,

1. I tested seal integrity around the carb manifolds and since they where ok I removed the carbs. I clean them entirely and then refitted and balanced them. I found no problem and it failed to fix the issue.

2. I went so far as to remove the rocker cover (and all that goes with that) to check clearances and found no issue and no adjustment needed and it failed to fix the issue.

Then a week later, after I washed down the bandit with a power hose before I had one more look at the carbs, I discovered an issue.

When I lifted the cap off of no 2 carb I noticed a clear fluid sitting on the diaphram. Without thinking about it I assumed it was petrol which wasn’t unlikely as I hadn’t drained the carbs before removal. But after a bit of poking I realised it was actually water. So how the hell had clean clear water got in there?

Took me a while to figure it out but it seems it got there through the cracks in the cap.

They are actually quite hard to see with the naked eye but they show up quite well on the camera (with flash). Both carbs 2 and 3 had cracked caps near their bolt holes. How this came to be I am willing to blame on thermal abuse, what with the two inside carbs having less free air flow (I think) than the 1 and 4, but in the end thats only me guessing.

What I do know is that once I replaced the two caps with better ones (off of, as it happens, an older set of carbs) she was back happily idling at the 1100(ish)RPM and the problem appears resolved.