And now it’s a joy to drive…
I mentioned here that one of the issues with the running of the Gamma was a flat spot at around 4500 rpm.

This coupled with the feckin’ L plate high viz vest was making me look even more of a novice rider than I feel I deserve, I either had to rev too high so as to keep it above this spot at all time’s and make myself look like a hot headed young lad on his tortured little fizzy or run lower down and it would sputter and jerk it’s way through this 1000rpm wide barrier until it started pulling again. Neither of these options where going to contribute very much to what little bit of cred this bike had. So I set out to solve this problem asap.

My first thoughts were that it was an issue somewhere around the carb set up or fuel supply end, so I tried a couple of different jet needle settings which appeared not to change anything at all. I adjusted the idle air screw settings and I checked the timing, all to no avail. Then I remembered I had removed the intake pipe from the head, (way back when I was struggling to get the engine back into the frame for the first time). And it occurred to me that maybe it wasn’t sealing properly since then. I had added a liquid sealant to it when I originally put it on the head but I hadn’t been so attentive when I was putting it back after I had finally gotten the engine in place. 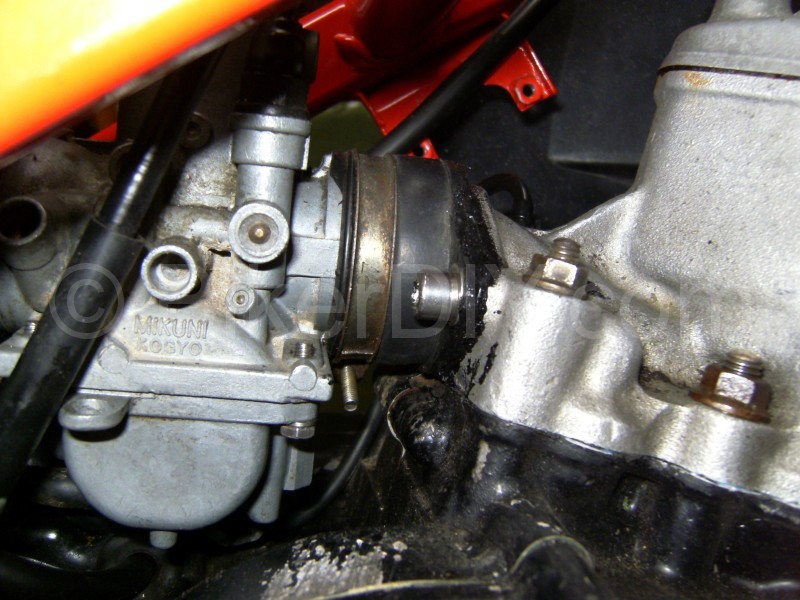 Now this pipe doesn’t come out easily once all the engine and air cleaner bits and pieces are in place so all I could do was prise it away from the engine about 5 mmm and smear sealant into the gap with the blade of a knife. Makes for a messy looking job but it sealed it up ok. So I let it set for a while, and then took her for a spin, and right away, before I had gotten 40 yards from the gate I knew it was much better. It still has the slightest dip at 5000rpm but you would hardly notice it and now it is a completely different machine to ride. It will pull away now all the way up through the revs and kicks off in a big way just about 7000rpm where the power valve kicks in and the next thing you know it’s at the red line. Great fun….

It might be just me, but it seems to just want to be redlined all the time, which might be one of the reasons why so many of these where siezed up by us young lads back in the day. LOL