Not so much a rebuild and more a rescue.

The story behind this bike, at least with respect to it’s last owner, is remarkably similar to the Gamma. The previous owner had gone abroad some years ago leaving the bike in it’s used but relatively good condition in the garage. Quite a few years later he decides the bike may be got rid of as he isn’t coming back any time soon. (times that are in it an’ all)

A Suzuki dealer I know is told about the bike and he takes it in.

Now whether he really had me in mind for it, is up for debate as he could have broken it for parts for similar money, but he was right when he said I might like the bike as a project because obviously I did. 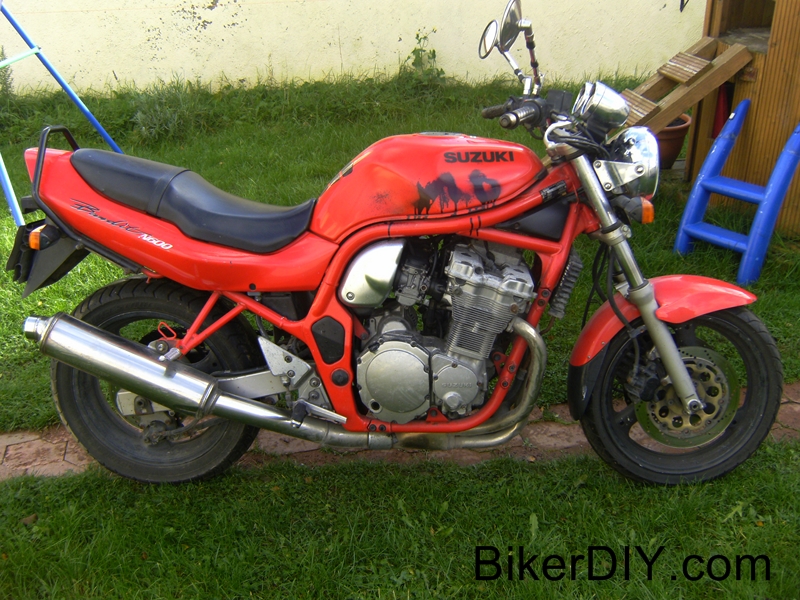 The partially “resprayed” side.

As you can see pretty much all of it is there and in good condition. The only part I see as missing is the plastic chain guard. The engine has less than 14k miles on it but it was left with all it’s fluids still in it, petrol included, so the fuel and oil systems are going to need serious flushing out and maybe more. The paint is original and hasn’t turned pink much, which I’m told by people who know, was a common occurrence with the early model red Bandits. It’s the graffiti on the tank and the associated splatter and runs which reached the frame, engine and the relatively fragile silvered plastic airbox covers that are likely to prove the biggest challenge. Happily I have a friend who knows a huge amount about paint maintenance/surface treatments and their repair, so hopefully not only will he aid in the removal of the paint that isn’t meant to be there but also in the preservation of the original paint into the future.

Like I say not really a rebuild project, more a challenging rescue, but as it’s a 4 stroke DOHC engine which is outside my experience so far I am looking forward to learning a lot, all be it at my own expense.

Also, I must admit I am looking forward to experiencing the whole 0-60 in 3.9 seconds that these bikes are said to be capable of. That’s assuming I am able to get her to run properly.