As is briefly explained elsewhere on this site Bikerbabes Dragstar 125 ended up a category C (uneconomical to repair).

As well as all the sh1t that comes in the aftermath of an RTC it meant that Bikerbabe ultimately was in the market for a replacement for her (fine example of it’s kind) Dragstar 125 for when she could ride a bike again.

After much searching and some failed negotiations, a direct replacement was proving just too hard to secure. So we went another way and decided to find a project bike that we could make into a good replacement.

And so we found this Honda VT700c shadow. The bike. 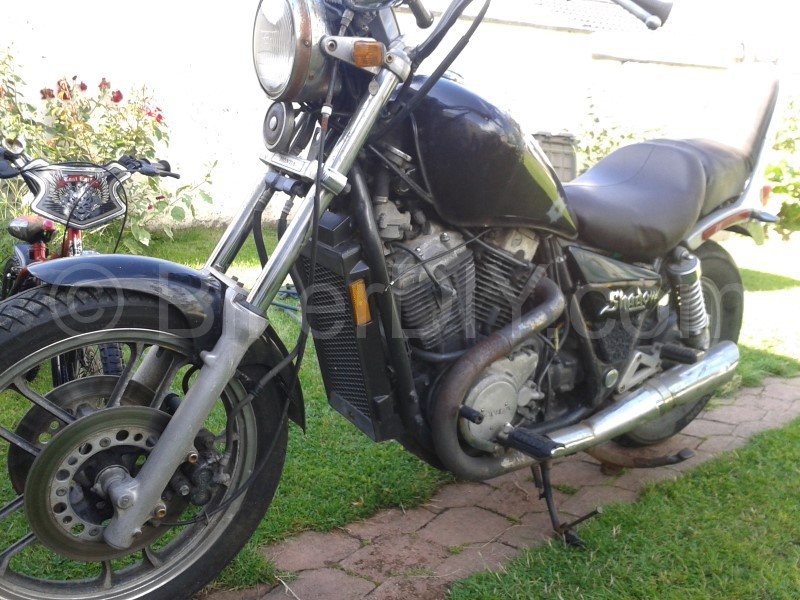 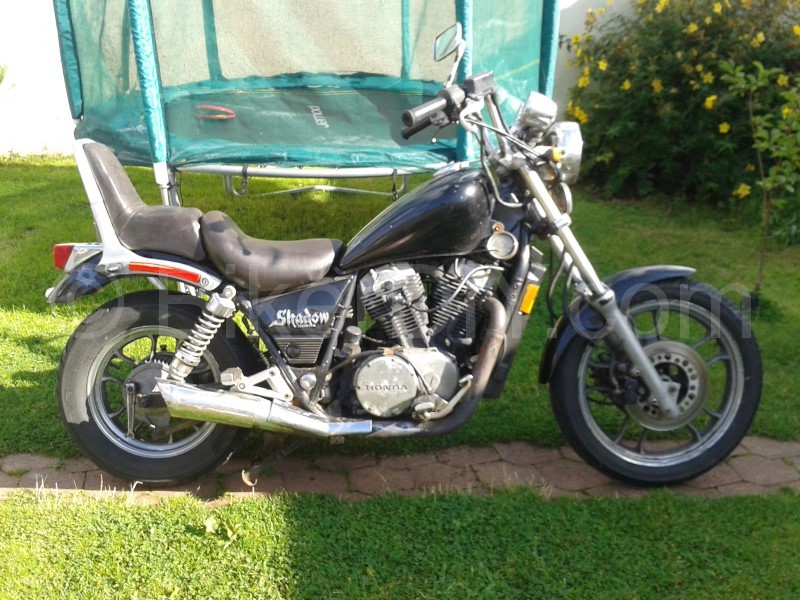 The back story. I have very little back story for this particular bike save that it has gone to one weekend rally in the previous year and spent most of it’s time parked outside in the elements.

As for the models back story this is a 1985 Honda Shadow model VT700c. It was built for the American market and at some stage imported to Ireland. It’s engine capacity is 700cc instead of what the rest of the world had at 750cc because of the then requirement in America that any bike over 700cc be taxed an extra high import levy ( a move squarely aimed at reducing the foreign pressure on the American manufacturers of big displacement engine bikes such as Harley Davidson). The Honda response was to reduce the capacity of this bike to 694cc to avoid the tax but meanwhile the bike still delivered the same power as the 750cc apparently and is otherwise identical.

Colour: Candy Glory Red or Black where originally available. This bike was first the Candy Glory Red and apparently has been changed to several colours until arriving at it’s current Black.

A quote from the technical features part of the Honda VT700c workshop manual which I thought was interesting..

“The Honda V-Twin engine
1983 shall be known as the year in motor history that Honda introduced their line of V-twin engines. Although the V-twin engine is not new to motorcycling, Honda has refined the design more than any other manufacturer. With liquid cooling, hydraulic valve tappets, one-way clutch that helps prevent rear wheel lock-ups and an off-set crankshaft that is designed to virtually eliminate primary imbalance; Honda’s V-twin engine can be considered a new design.”

After even a short browse around the web it becomes obvious that the Shadow is something of a staple in the cruiser line of bikes. And there seems to be a huge amount of info on modifying them which is great because this is not to be a factory spec rebuild project but rather a Bikerbabe spec re-animate project. Bikerbabe wants this one to be made to suit her own requirements both in physical layout and styling. The physical layout requirements appear easy enough in that she wants it lowered just a bit and style wise she maybe wants it bobbed or maybe not bobbed, and black but maybe green….. But it’s early yet and this was the point of picking up a “project” bike, so that more option’s where there without having to take down previous good work. So I’m looking at it as very much the blank, corroded, neglected canvas that we where looking for.

And now a quick tour of the most obvious blank, corroded, neglected points about the bike.. 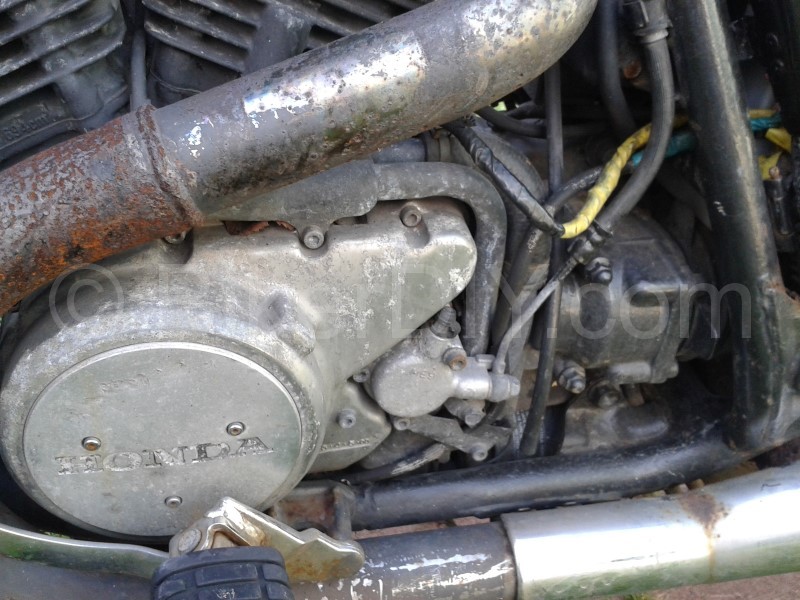 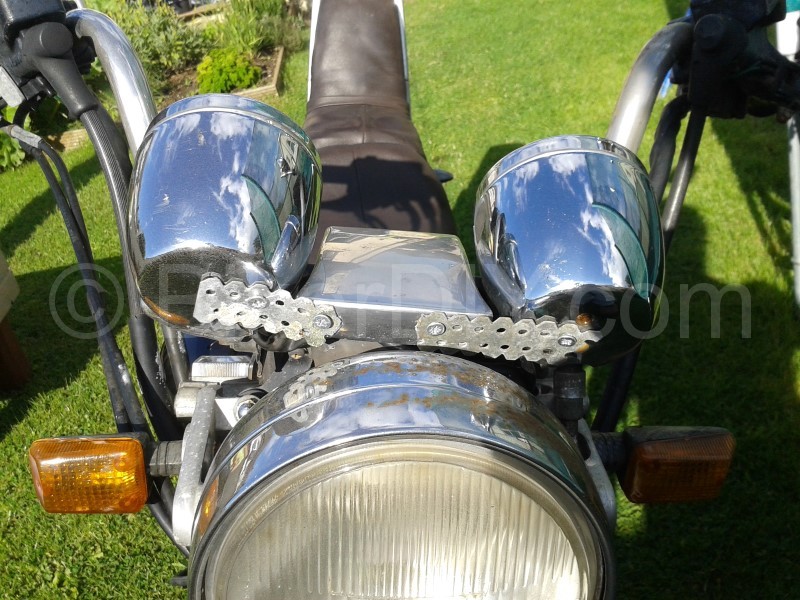 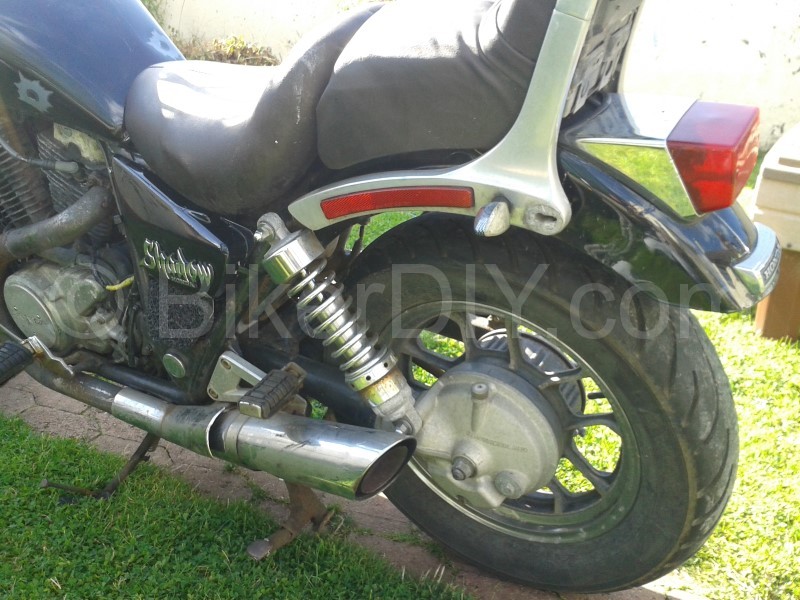 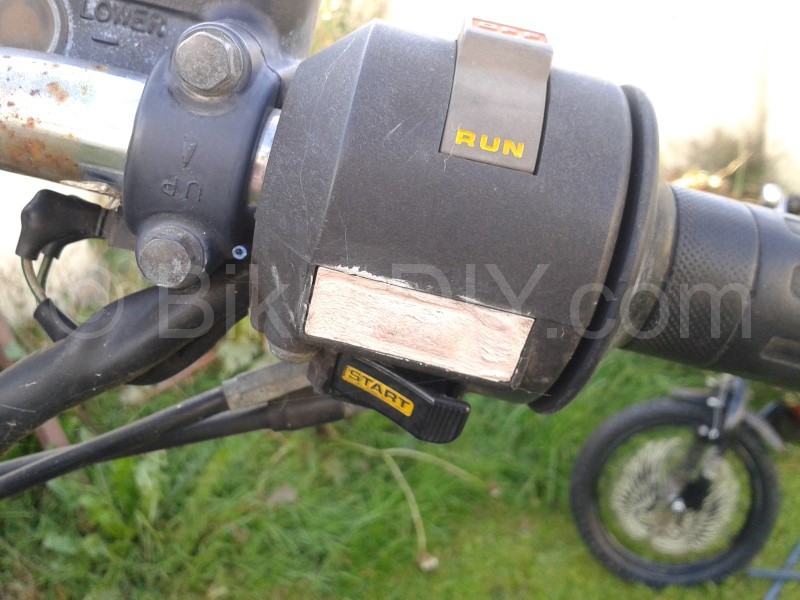 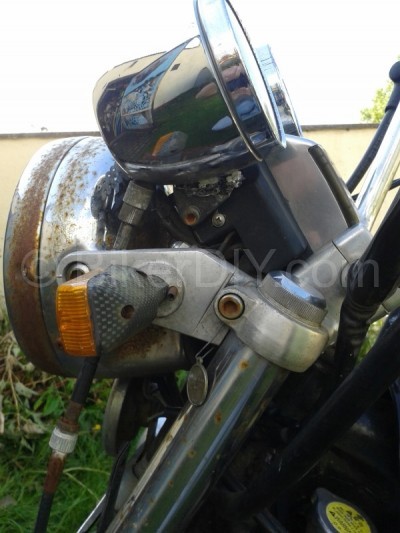 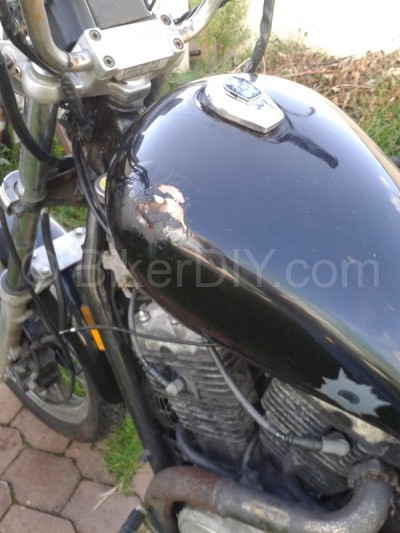 The lhs of the petrol tank was bet in at some stage and was badly repaired after that. The electrics have been tampered with extensively, both the wiring and the gear itself. The handlebar gear is mostly not even Shadow but as we aren’t thinking of a factory restore here that in it’s self wouldn’t matter, it’s the physical state of it that is my biggest concern. The indicators aren’t original or effective either and the reg plate light and it’s reflector are missing. All the chrome is the worst for wear especially anything on the left hand side of the bike and both the exhaust first sections have been repainted (badly) in black to try and hide the lost and pitted chrome that once would have gleamed there. And as for the clocks, well I can only imagine how they ended up like they did..

The list of issue’s might go on a bit more but it’s mostly all there and it does run and ride well enough for a neglected thirty year old bike. Check out what it sounds like..

So there we have it, Bikerbabe’s Honda VT700c  and my next project bike. Below you can see some pics my mate Gonzo took where he shows some of what a photographer can do to make even a bike like this look not so bad in fact.. 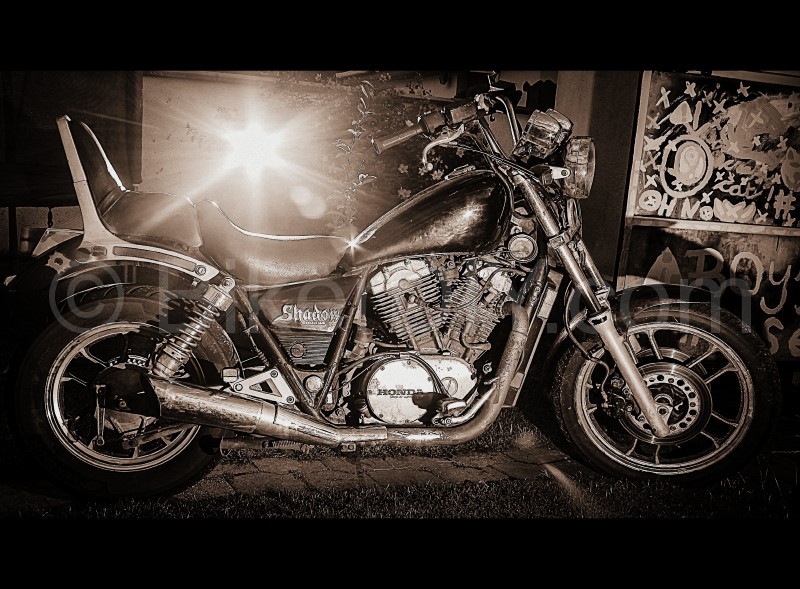 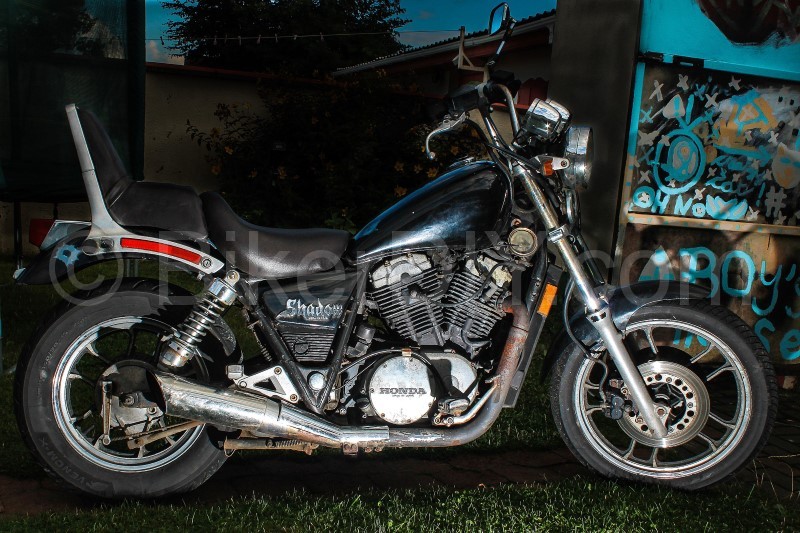 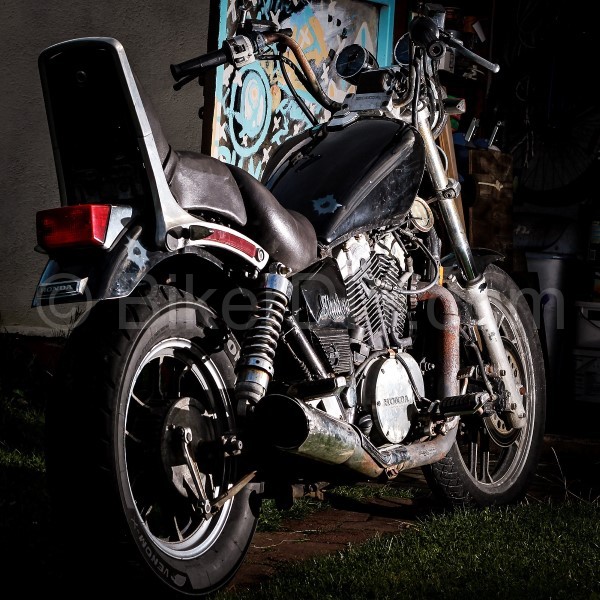 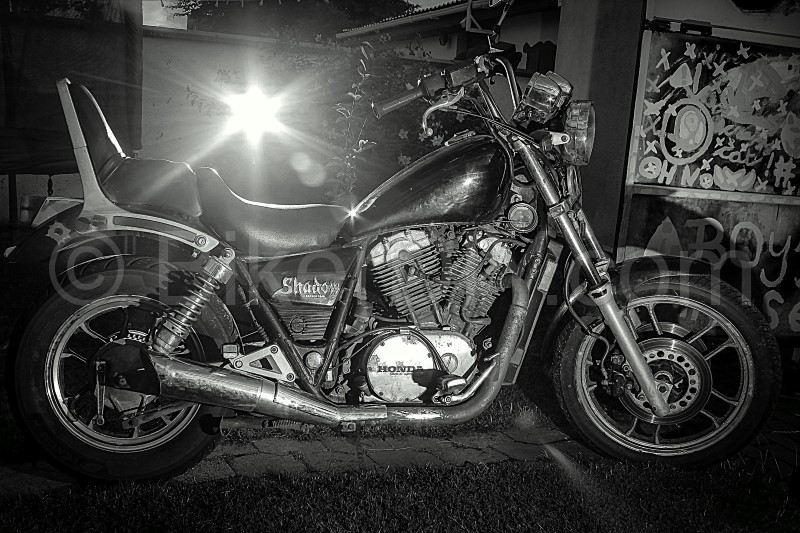 I’m hoping to stage a similar photo shoot at the end as a “before and after” kind of thing, only hopefully with a better example bike and maybe a pretty girl to help focus the attention (a guy can dream can’t he).

*** Note for current Irish drivers licence purposes (08/2014) this bike is too powerful to ride on an A2 licence (35KW limit) but at the same time (changed recently) it is also not powerful enough to be a representative bike for the test for an A category licence (50KW required) so it therefore falls into that “no mans land” that unfortunately it seems most low saddle height motorbikes now reside in in Ireland.

"The bike and the back story."