My original plan is aborted. (isn’t it always…sigh).

Since I had gotten the engine to run relatively easily (he says now that the bruises are fading), I thought I would leave the engine alone for this year (2011), aside from a bloody good cleaning and maybe a touch up of paint from a can.

I would love to strip it, powdercoat the casings and rebuild the whole engine completely but the potential risk of damage to casings, housings and sealing faces coupled with the cost of replacing all the bearings and seals (assuming they were even gettable) when the engine appears to be running ok aside from the need for cleaning and a new spark plug, meant that a full break down and rebuild just couldn’t be justified right now, so I decided to leave well enough alone for this time round. (In hindsight I think eagerness to drive the bike again had some influence on “the plan”) 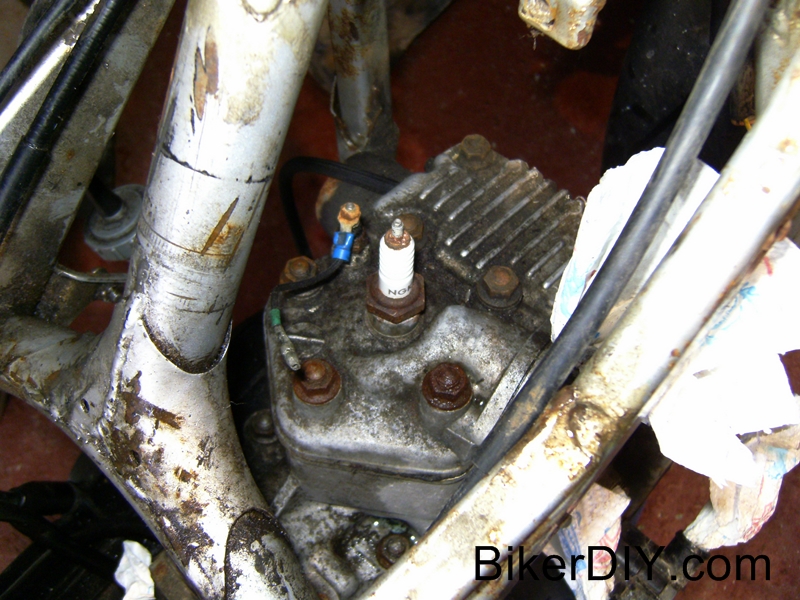 I believe I mentioned it needed a new plug. 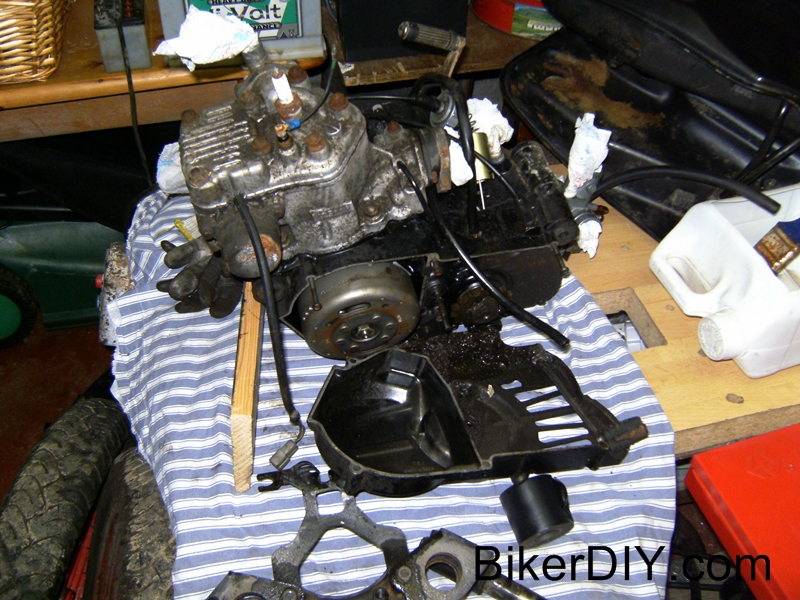 And a good cleaning.

But then two things happened that stopped this being entirely the case, the first was I recalled how a lot of these where seized up under pressure back in the day and so had re-bores and oversize pistons fitted or worse, sometimes just had new rings put in to keep it going, and although I don’t remember this bike having anything like that happen to it, I didn’t know it all of it’s life, so I decided I’d have a gander at the head and barrel at least.

The second thing was I discovered an old oil leak and while that is covered in a separate post, it also meant engine casings couldn’t be left alone. So like I say, original plan of “leave it alone, it’s fine” was aborted..

The gasket set was only €20 or so anyway so well worth the piece of mind of having a look. Famous last words….
Here is what I see first when I open it up…. 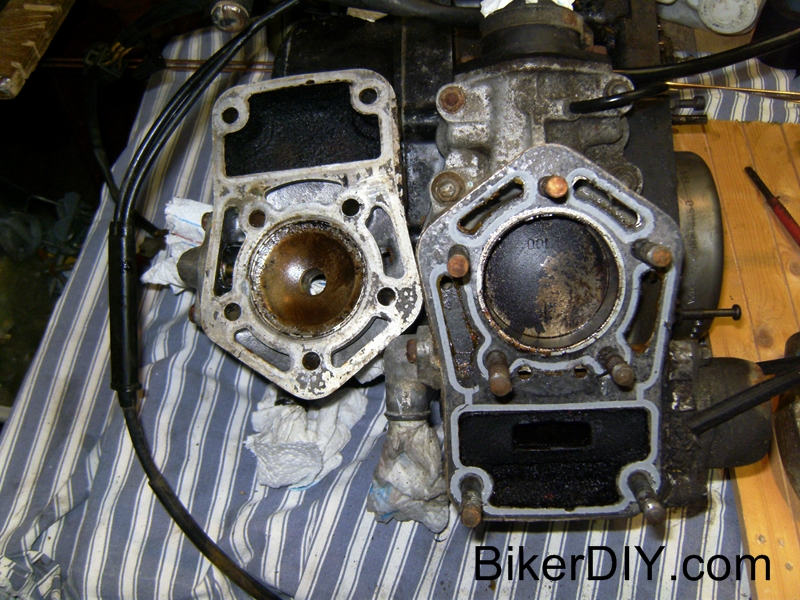 OK, it’s a bit coked up an all but do you see the numbers on the piston? (there upside down in this picture by the way)

A bit of cleaning and it looks like this… 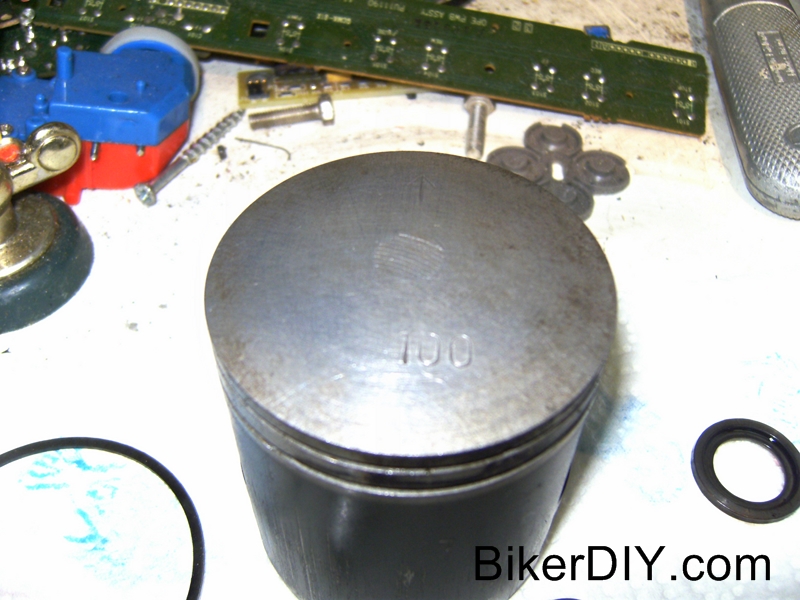 That’s a 100 which means that not only has this engine been bored out to it’s first oversize of 0.50mm but is in fact bored out to 1.00mm oversize which according to the Suzuki book is the maximum oversize for this barrel (I hear tell of a 1.50mm and 2.0mm oversize, which while it isn’t Suzuki specification it apparently works, but maybe something on that elsewhere). This re-boring may not have happened as two separate visits either because, severe enough damage when it is seized can mean it has to be bored out to the 1mm to get passed the damage in the barrel.

Of coarse when the head itself looks like this.. 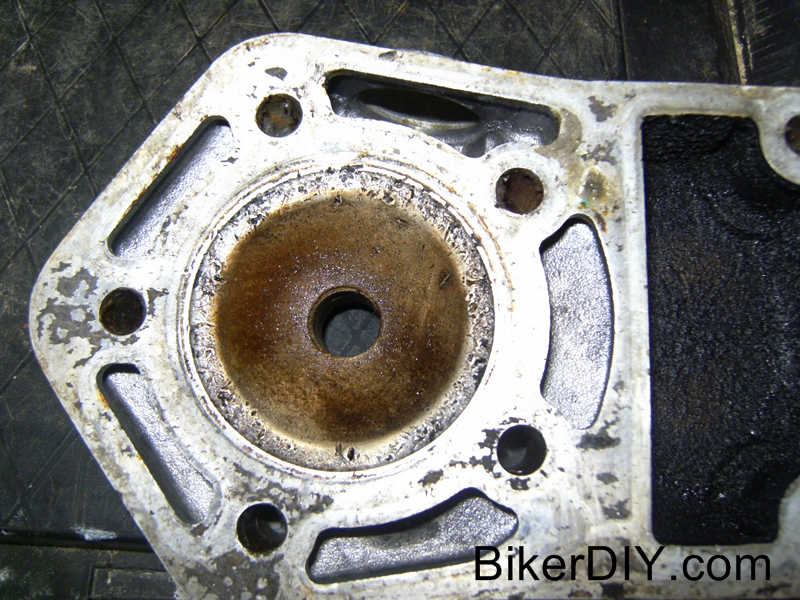 The pile of deep marks around the edge suggests to me that a piston ring broke apart while she was running and the resulting harm caused by loose bits of piston ring could account for the 1.00mm oversize.

On the up side all the measurable’s, like crank movement, bearing tolerances, piston, piston pin and piston ring tolerances check out. Also the barrel is clean and measures as dead on 1.00mm oversize and there is no detectable head distortion.

The reed valves are well within tolerance also.. 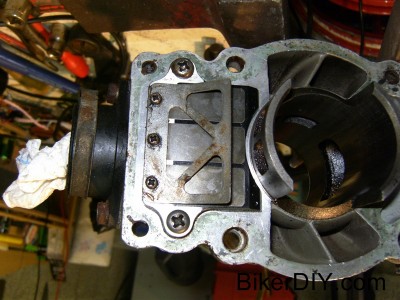 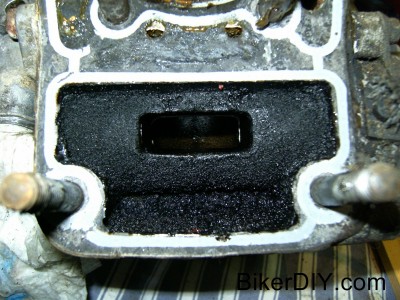 So aside from a good de-carbonising…

(Which I have to say in the absence of a good parts cleaning set-up like a Grease eater or something, cleaning this stuff isn’t that handy.)

And a full set of new gaskets and O-rings (for the cooling system), 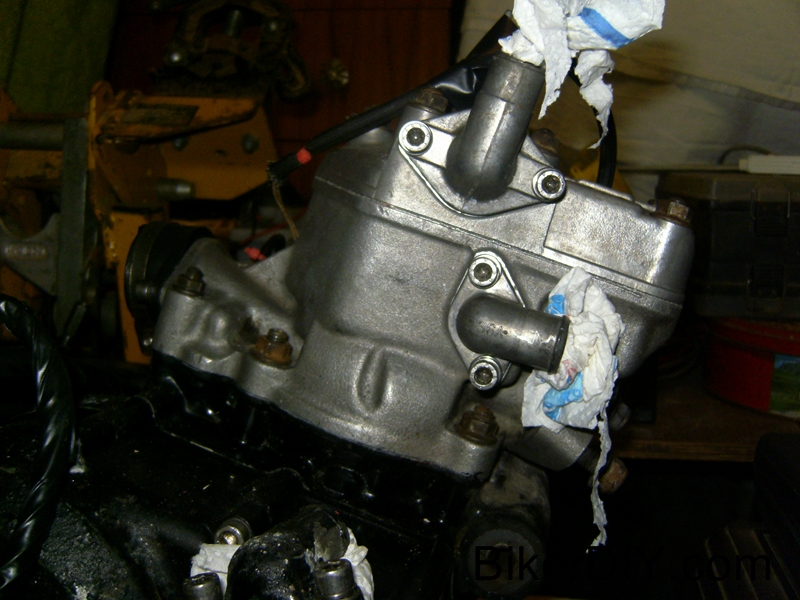 a few replacement bolts and the head is good to go. 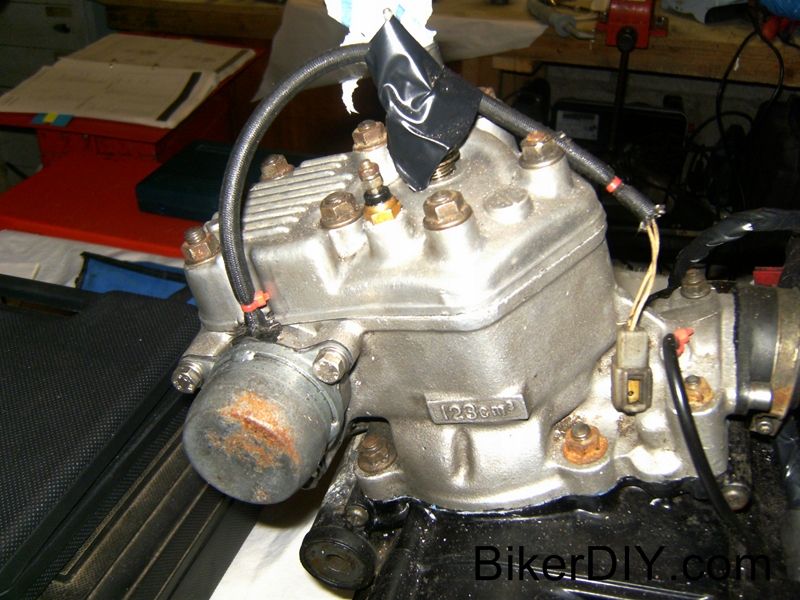 Now that I look at these pictures again I think the power valve servo cover could stand a coat of paint to help protect it. I’ll do that before I put her back in the frame.

And so on to the next engine issue, the oil leak.