It’s my first encounter with the “part can’t be got” situation on this project.  Unfortunately, as far as I can find out, there’s a good chance that Suzuki never supplied this part as a separate item from the shock unit. What I am referring to is a small oil seal (25x20x4) which was used on either side of the rear shock mountings. The seals served the duel purpose of keeping the lubricating grease in the joint and the ever present muck and water out of the joint. 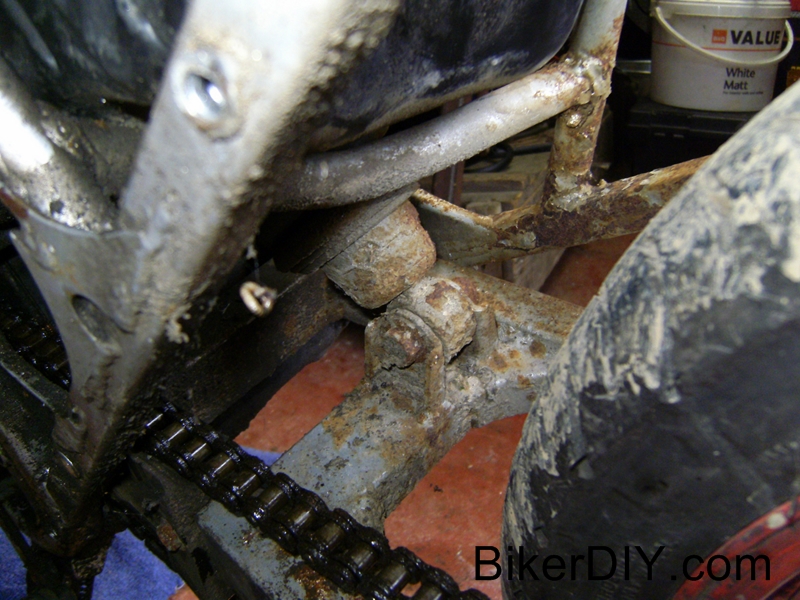 In the centre of the picture above is the lower shock mounting were it joins to the swing arm. This joint doesn’t move very much (only a couple of degrees rotation) but if it didn’t move then the back suspension is effectively locked up causing all sorts of mechanical stress and grip problems about the bike and sore arse syndrome to the driver (no he he for me). There is another joint just like it where the shock joins the frame under the front of the saddle. The moving parts of these joints are quite simple as there are no roller/ball bearings involved. Instead a simple shell bearing type construction is used. This design of bearing has big advantages where serious hardship has to be put up with (such as on Irish roads) but only small increments of rotation are involved. They have an inner roller…which is supposed to look much more square and shiny than this one… 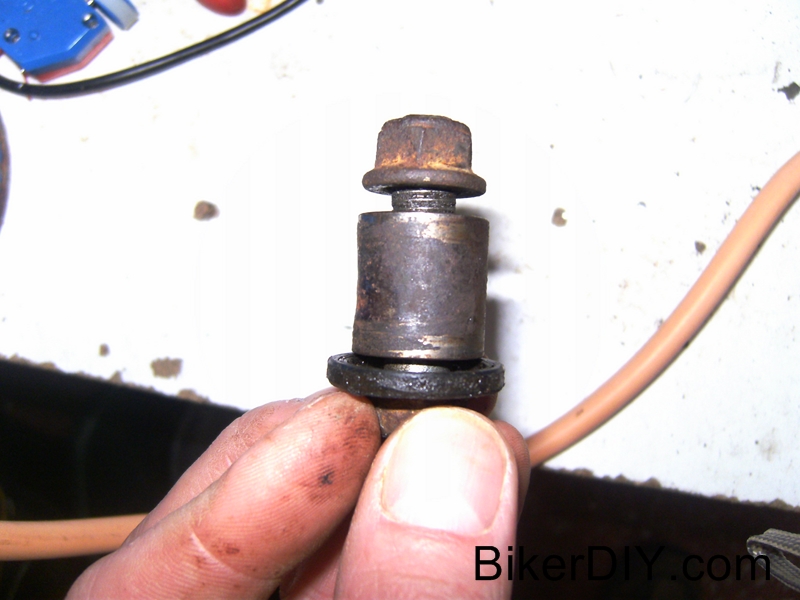 You might notice the more severe wear on the left hand side of the roller above. There is also a bronze phosphor type ring which fits between the roller and the outer part of the shock joint “eye”. Here’s a picture of the replacement bits I was able to get. The rollers are brand new from Suzuki and the rings are recycled from a shock that had lost it’s fluid but had apparently low or maybe easy miles on it as the rings where complete and still had the diamond profile cut showing all the way around the inside of them.. 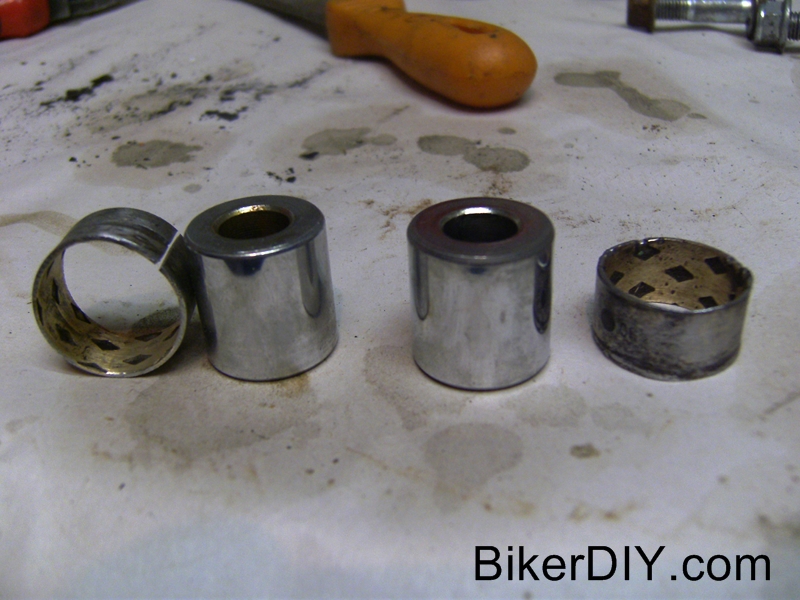 Now either side of these bearings are four oil seals (as I mentioned earlier) to keep the grease in and the dirt out. Here is a picture of three that I took out of my shock…. 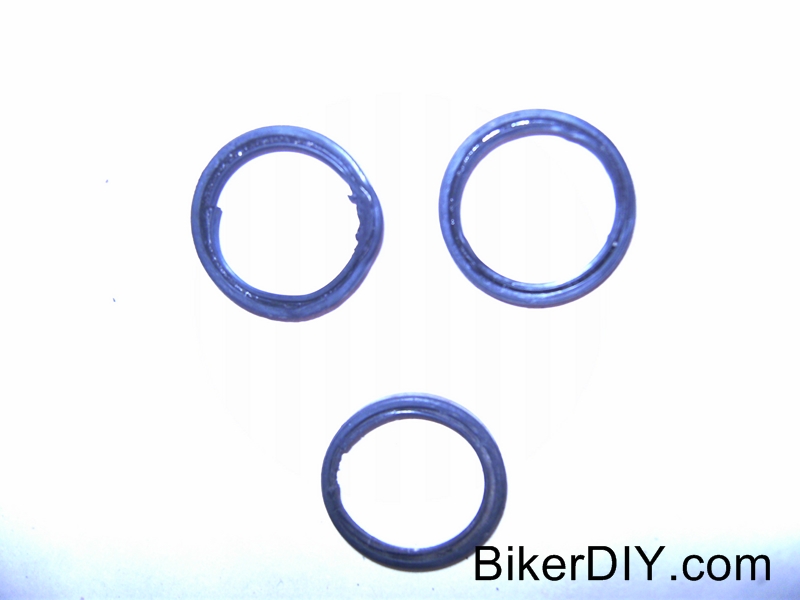 As the rollers and rings wear down then the seals get worn away as well (see above), you can see how they all have a particular area of damage were the worn roller was allowing extra travel into the seal.

The problem for me was that, while I had managed to get rollers and rings, this oil seal didn’t show as a separate part on my manual or on my Suzuki guy’s order list…feck.

My Suzuki supplier suggested using “O” rings instead because the seal isn’t under pressure. A couple of other bike guy’s I talked to also suggested “O” rings instead because it isn’t under pressure, but I held out a while until I definitely hadn’t a choice, and I have to say if you can’t put on the swingarm a lot of other assembly stuff is held up…

Then, as chance would have it late one night, I had found (googled) an Irish company who appeared by their web page to only supply in bigger quantities than what I wanted. I chanced an e-mail reasoning that maybe they would have a suggestion as to which of their clients I should go to. And to my surprise in less than 10 minutes I had an answer from their sales director telling me that while they couldn’t do exactly what I was looking for, they had a 26x20x4 seal (as opposed to a 25x20x4) in stock ready for me to pick up for a mere €10 for the 4 at their trade counter in Dublin.

So with just a little bit of work to the outer face (to gain 1mm OD) I have an all newish set up in the shock assembly joints. And with a lot of cleaning and sanding and some “Hammerite in a can” to finish it and it looks not too bad if you ask me. 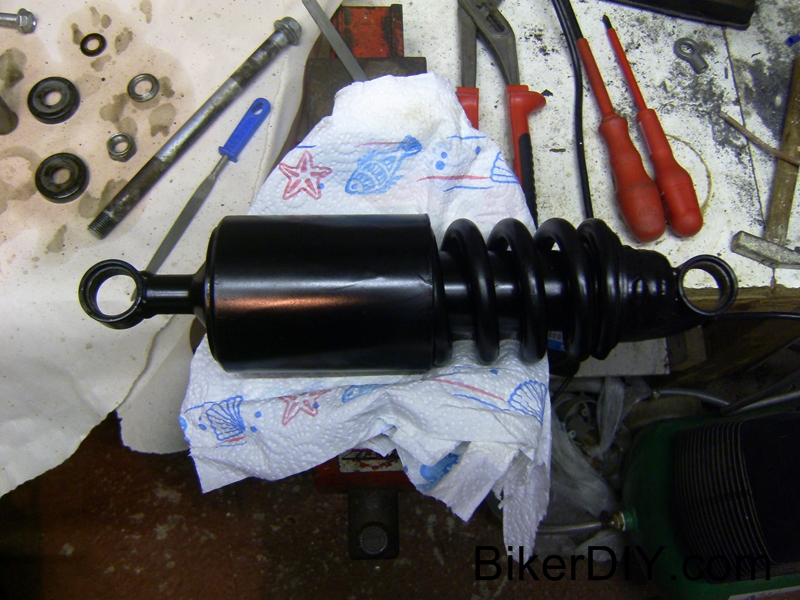 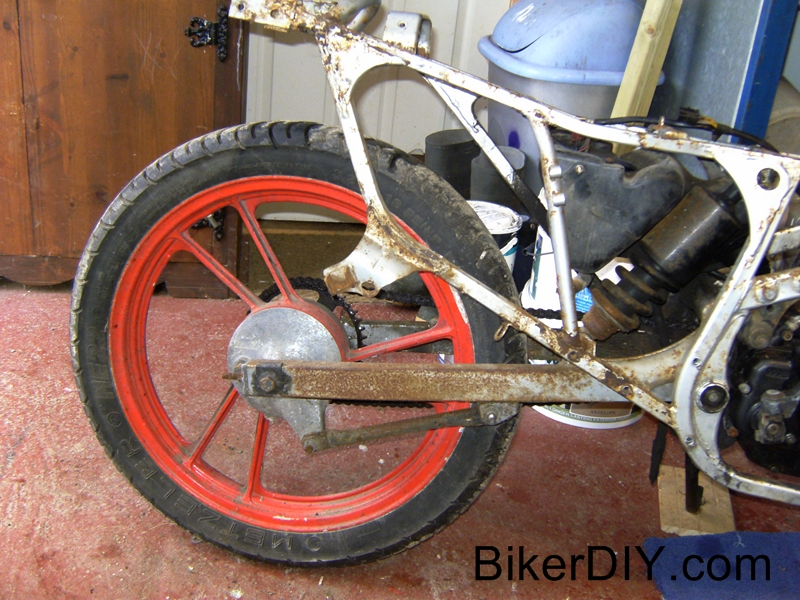 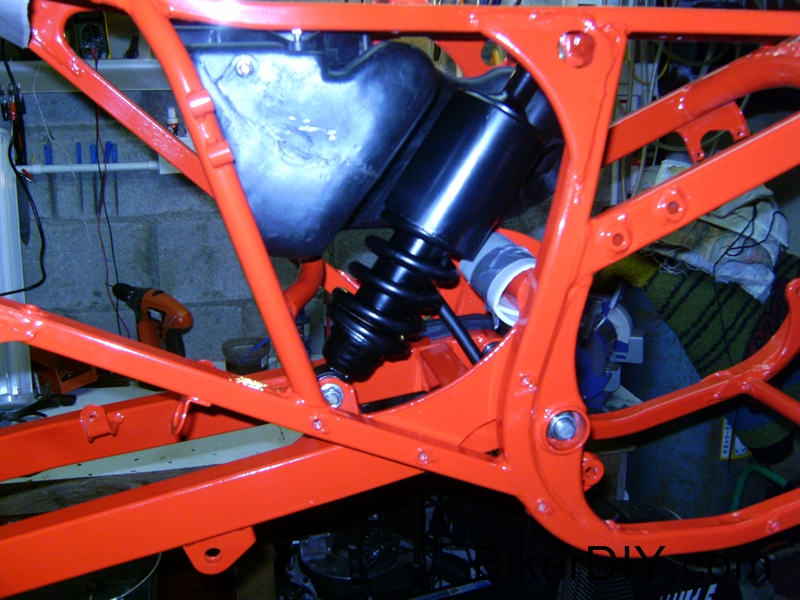 N.B important note to any trying this same project, you should fit the air cleaner box (glarey black bit above left of shock) first before the shock is fitted, ’cause if you don’t you will lose time later when you find the box just won’t fit past the fecking shock when it’s fixed in place. Of coarse I just knew this from instinct and didn’t get caught like that… I’m just saying because other’s might not see that right away and all….like I did obviously….from instinct…

And another jobs a good’n.

As an aside, am I the only one to think that the title of this post would be a good name for an Irish trad rock band?