While I was still feeling my way around a rebuild project, a Suzuki dealer whom I since have come to know quite well turns round and says “you know I was thinking I might still have an old rg round here somewhere….I’m sure I was lookin’ at it lately”. A bit of climbin’ and pushin’ and pullin’ later, low and behold we find this…. 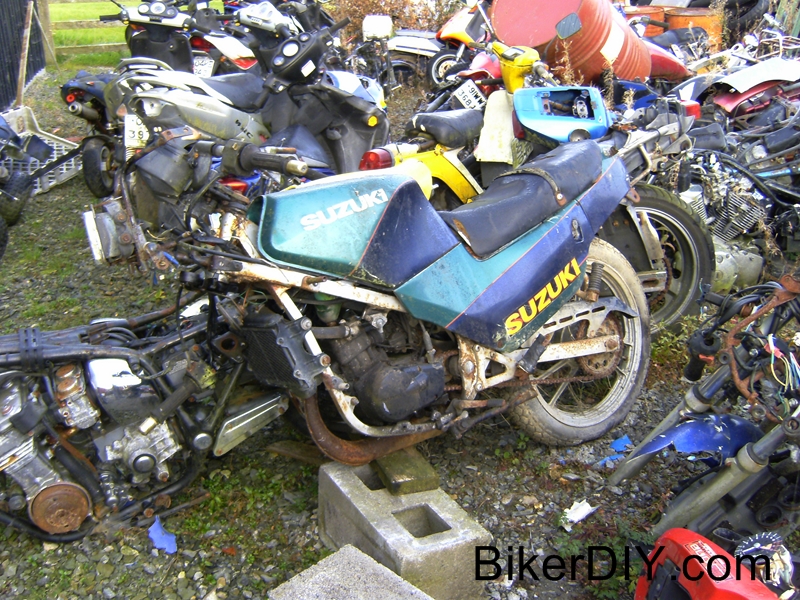 Ok, it’s an RG 80 so the engine is no use to me and in fairness it’s probably useless anyway, and it’s mostly scrap (never mind the colours). But the front end was in good condition , so much so that I struck a deal and took it all (forks, wheel, mudguard, and brake calliper) straight away, before I took any pictures. The laugh was that we had to dig it out from here first… 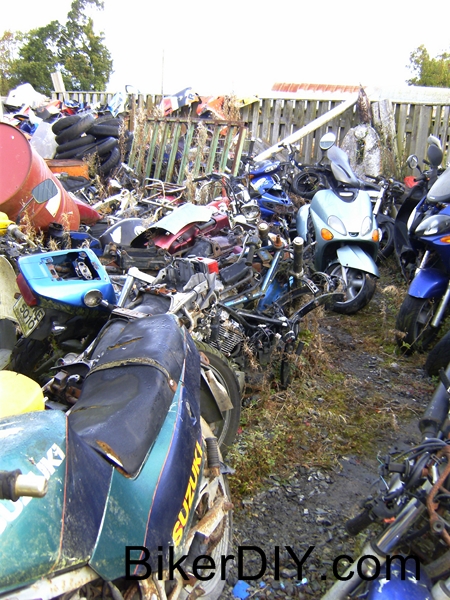 We started beyond the tyre pile at the back (of the pic) and you can see the RG in the foreground where we stopped, and the route should be easy to see as both wheels where stuck and cut a nice track in the gravel…What you don’t see (and I will be eternally sorry I didn’t take a picture of) is the pyrimid of “in the way” scooters we had to build just right of shot (up against the fence) to get this Rg 80 out of there. And that light metallic blue scooter (top right looking like it’s new), well that fecker had a tree growing up through it that we had to cut down first just so we could move it out of the way, many a “feck” was uttered I can tell you. It’s engine is still wrapped up in the roots of the tree we cut down, it was easier just to cut the engine loose.

Well worth doing it and parting with the cash all the same because as it turned out my own front end, I learned later, had a few problems that this “donor” solved. These are covered elsewhere but so far this donor bike has provided front fork inner tubes (no re-chroming required just yet), head light reflector and lens, front brake calliper housings, rear mudguard, and probably the front tyre.

And also a couple of plastic bits and pieces that I would have lived without but am just as happy to include, like these…… 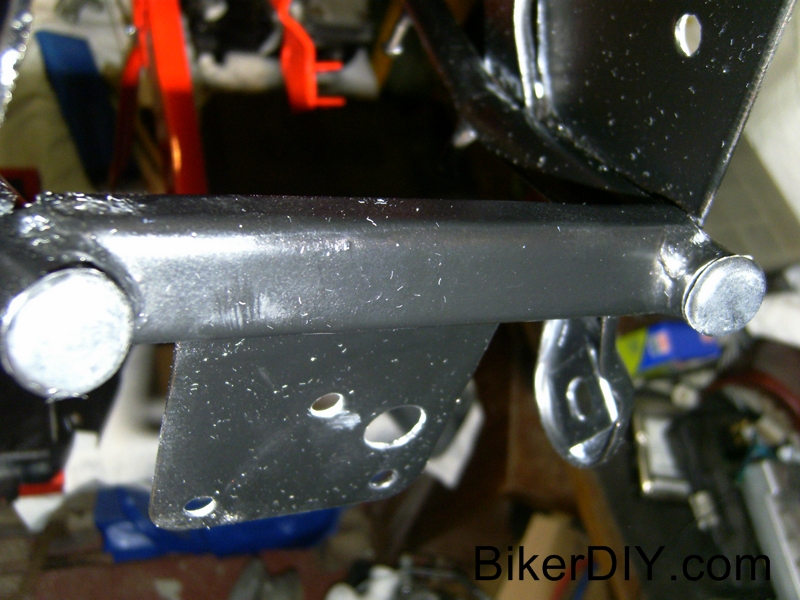 What I am referring to are the rubber end plugs in the tail sub frame pictured above. You don’t get to see them in any version of the Gamma as they are normally covered by the plastic tail piece, as is pretty much all of the tail end sub frame.

I haven’t much more to say about this “donor bike” as it has probably given me as much as it can, but still if you have/are following the rebuild you will have seen or will see how much it has provided me along the way. A good find, I think.

"I have found a donor……eeerm…Doctor?"

One Response to “I have found a donor……eeerm…Doctor?”