Fuel filters are absolutely essential with an old bike, or to be more accurate with an old tank…

As I mentioned in the carb cleaning post, some muck was getting into the fuel. Most likely it was all rust from the inside of the tank which is not the easiest thing to remedy. The most user friendly option (a term used lightly in this case) that I could find to deal permanently with internal tank rust is an epoxy coating which requires a few quid, a serious attention to detail, a rather corrosive acid cleaning and about 9 full hours to apply. It is also apparently better suited to tanks where the fuel outlets are mounted on a plate that can be removed for the application so there is no fear of sealing the outlets up in the process, which would be counter productive I’m sure you’d agree and in a lot of cases this plate also gives better access to the inside of the tank compared to going through the filler hole. Unfortunately the Gamma doesn’t have that removable connection plate and the outlet pipe’s are small so it would be hard work (or luck) not to close them up in the process.

So after a bit of deliberation I decided I’d first try just giving it a good washing out with the aid of my patented rust looseners (Top tip. They are all tied together because it is so much easier to fish them out through the anti splash filler hole that way compared to trying to shake them out individually. Thrust me I did it the hard way first so you don’t have too 🙂 ) 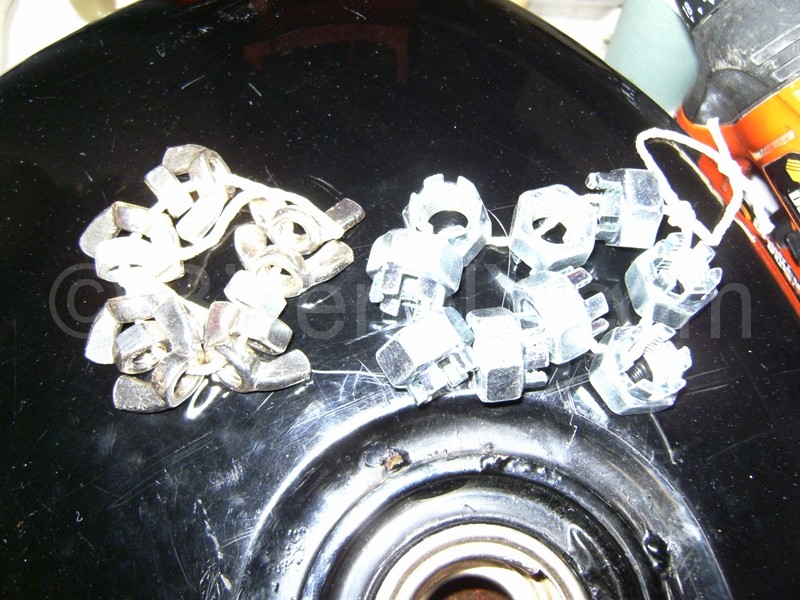 After that my thinking was a couple of cheap plastic in-line filters for the fuel lines changed out as required to keep up with whatever muck was left in the tank would surfice. 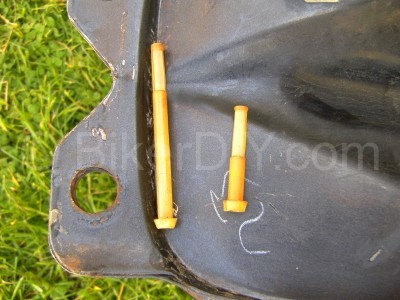 And then added to this I had a bit of luck finding some original in-tank filters. There weren’t any in my tank when I got the bike and although the shop manual shows some I had dismissed this as something for another region or some such. But while I was striping the tank from donor gamma no 2 I discovered these (–>) still in the outlets.

Pure luck that I discovered them. I was about to dump the tank as it was too far gone to be saved having rusted through completely all around where the saddle meets it on top but I had decided to take the rubber pads off the underside first when I spotted the little orange heads at the end of the outlet pipes. 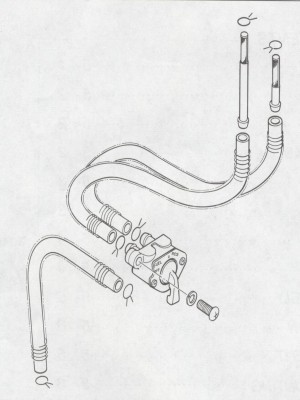 The very item’s the drawing’s refer to.

So now I have the original filters as well as the in-line’s in. These I hope will be enough to catch any still around rust particles. I also hope the soon return

to use of the bike will mean regular fresh petrol sloshing around which will I presume inhibit any further rusting inside the tank.

"Fuel filters, and the lack there of,"