Tested the thermostatic valve (thermostat) according to the workshop manual.

I’m testing this now while it is easier (while engine out of the frame) so that if/when I start the engine again I can have better confidence in the coolant system if I have temperature issue’s.

A good way to do this is to trap a piece of thread between the valve seat and the valve and then submerge it suspended in a pot of water with a means of heating the water and reading the temperature in real time, in my case a camping stove and a multimeter with thermocouple attached but any thermometer that will read from less than 60 Deg C to above 80 Deg C will do the job. The idea of suspending it from a thread is a simple and effective way of indicating at what temperature the valve first opens as the valve will let go of the thread and fall to the bottom as soon as the valve lifts. The Suzuki specification is that the valve must open at a temperature between 63.5 Deg C and 66.5 Deg C and that it will be open to at least a 3MM gap between valve and seat by 80 Deg C. 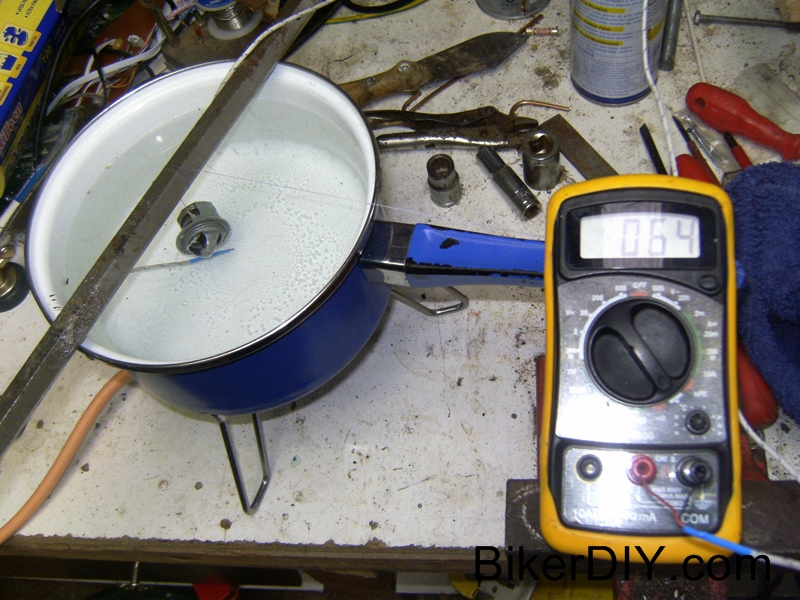 In this case the valve opened at spot on 65 Deg C and it was actually open to just over 5mm at 80 Deg C. So the thermostatic valve checks out ok. It’s only one small part but good news is good news. 🙂