Similar to the thermostatic valve test only less thread and more wires.

I still need the pot of water and the means to both heat the water and measure the temperature of the water in real time.

I don’t want to totally submerge the probe (just the copper coloured bit which would normally be inside the head of the engine) as immersing both electrical connections will give a false resistance reading due to the water itself conducting electricity. This test requires that the resistance of the probe is tested at different temperatures, therefore we need to read the temperature of the water and at the same time read the electrical resistance of the probe. 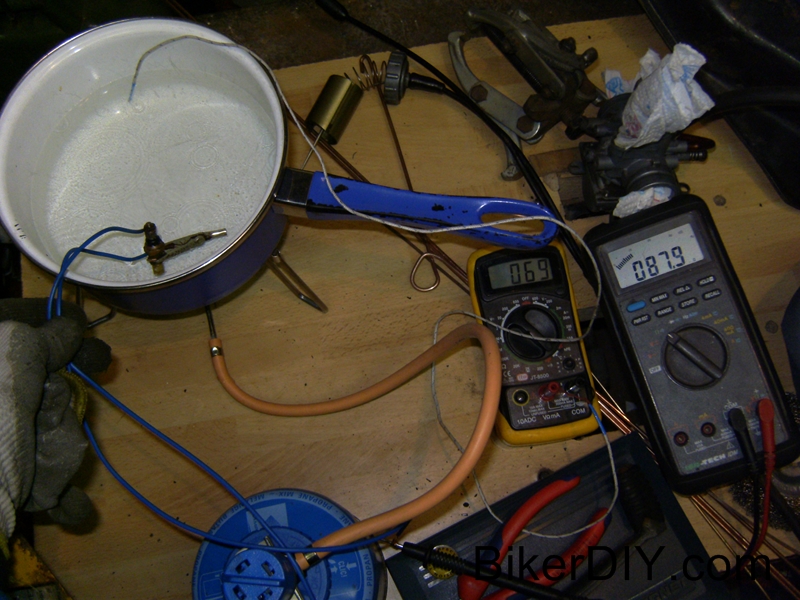 In the picture above the left hand multimeter is my current temperature showing 69 Deg C and the right hand meter is my current resistance showing 87.9 ohms. If you do the sum’s this is a consistent value to follow the line set by the spec and the values at the 3 stated temperatures where as close as makes no difference. If I were to get open or closed circuit within these limits however then I guess it would be time to replace the probe.

My probe tests out just  fine, so all good then.

As it happens checking this probe and the valve out early on probably saved me a bit of time later on, because when I first got the engine running again it ran quite hot, as in 3/4 scale on the dash. Knowing that the electrics where indicating correctly meant I was straight away looking at the mechanical set-up of the engine instead of wondering about the electrics or worse dismissing the high temperature as a false indication and possibly doing damage.