Before I started writing this post I joked with a friend that the post was going to read like a sales pitch for Meguiar’s products. And I’m afraid it will, but purely because in my opinion their products did an amazing job. I don’t have any affiliation to the Meguiar’s brand, there are other products out there which would give me as good a result I’m sure. (Of coarse I’ll edit out that last bit later if\when Meguiar’s and I enter into some sort of advertising deal 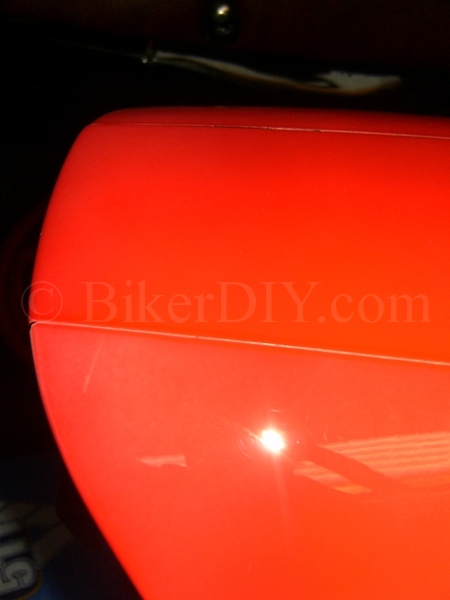 But anyway, to the job at hand. Underneath the added “artwork”, the bandit’s original red paint looked not so bad. There was one small stone chip on the left hand side of the tank, a few flakes missing at some exposed joints on the frame and a couple of scuffs but overall pretty intact.

I gather such a good colour in the red paint on these first Bandits is unusual by now as the red had a tendency to turn pink with exposure to sunlight. Indeed there is some pinkness at both sides of the tail plastics as you should be able to just make out in the picture (right). Strangely both side pieces had faded just at they meet at the tail while the centre plastic tail piece seems to have held it’s colour well.

Apart from this the bikes paint seemed to have escaped any serious harm in it’s 14 years of life before it landed at mine.

You know apart from the added paintwork that is. 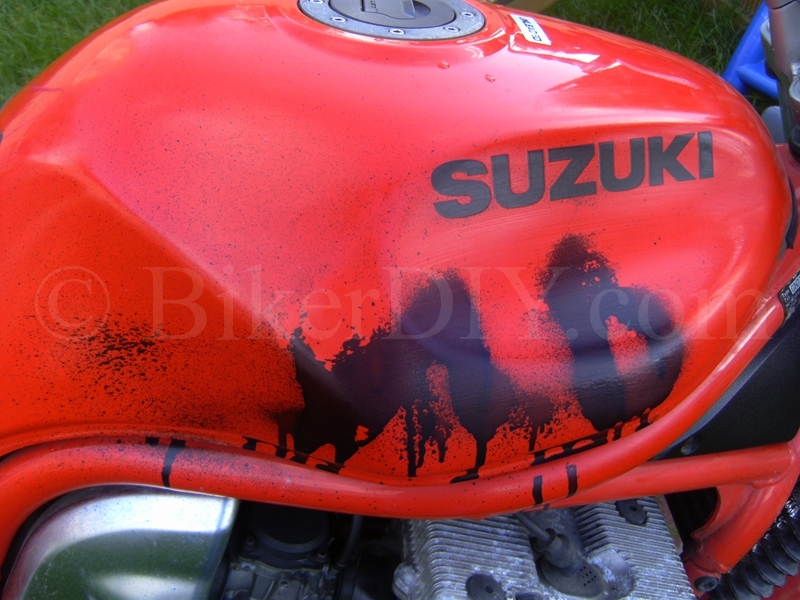 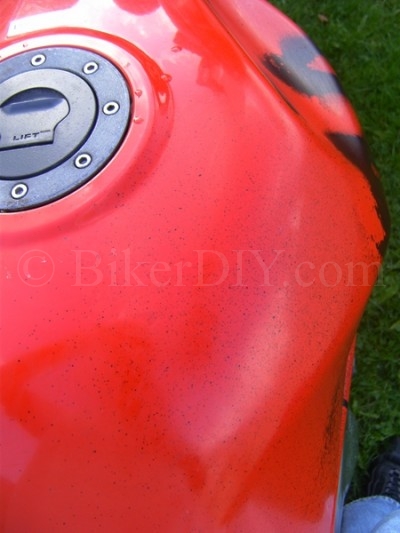 This graffiti was mainly on the right hand side of the tank, with some spots and runs on the frame immediately below the tank and slightly more worryingly also on the silver coated plastic cover on the side of the airbox.

The top paint didn’t seem particularly well bonded to the surfaces but it was going to need a delicate and patient approach to get it off with the least amount of damage to the original coatings, especially the very thin silver coating on the plastic airbox cover.

After taking some advice from a good buddy of mine, I originally started in with a clay bar and some quick detailer to lubricate it, but while this was definitely removing material it soon became apparent that the thickness of the offending paint layer was going to prove hugely time consuming and not inexpensive either at the rate clay bars and lubricant where being used up.

So I decided myself to move to a stiff sponge and some detergent\water. Not quite as stiff as one of those hard sponges sold as insect removers for car paint but not that far from it.

Starting light with the sponge and increasing pressure only where needed to shift a particularly stubborn spot, I found it was dealing with the offending paint quite well but I was suffering severe hazing on the finish as well. This was to be expected and compared to the depth of some of the scratches already in the tank paint work the hazing was going to be less of an issue.

So after 2 hours careful work I had this. 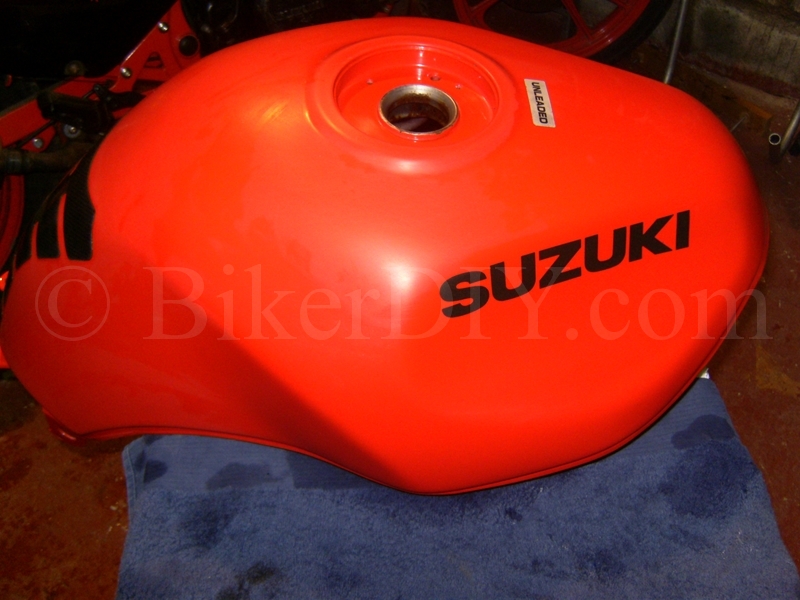 As you can see the offending paint is gone but at the cost of nearly all the shine in the original coat, it’s damn near a matt finish. Still it’s clean and I was confident the shine could be saved.

My advisor buddy requested that I provide proper comparison pictures, so I decided to split the tank down the middle with masking tape at the start and just threat one side at a time. My first visit to the paint was with a Meguiares manual applicator pad loaded with Meguiares Ultimate compound which I worked with for about 15 minutes on just about 1/4 of the tank surface, until my arm hurt which was how I decided it had been treated enough in this pass. I wiped it off to see how effective it was and I was very encouraged with the result. 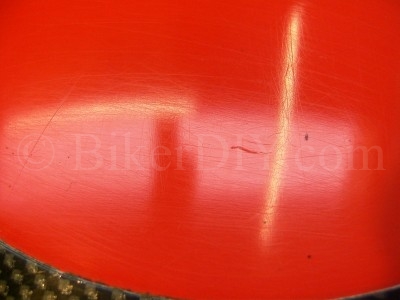 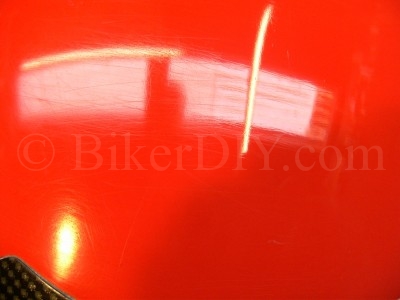 Greatly encouraged but with an already tired arm I decided to mechanise the process and I got me a cordless polishing machine. The fact that it was cordless wasn’t important to me at the time, indeed it somewhat hampered me in the end because I must have had to stop for four charges before I was done, but I actually chose it because at 20cm it had the smallest pad I could find in the shop, all the mains driven machines had 24cm pads and I figured the smaller pad would be more effective at getting into the contours of the tank. I can’t say whether the 24cm pad would have done or not, all I can say is that the 20cm pad did the job just fine, although the job was spread out over four or five days because of stopping to charge the battery.

After a couple of passes with the polishing machine loaded with UC, I really started to see results. 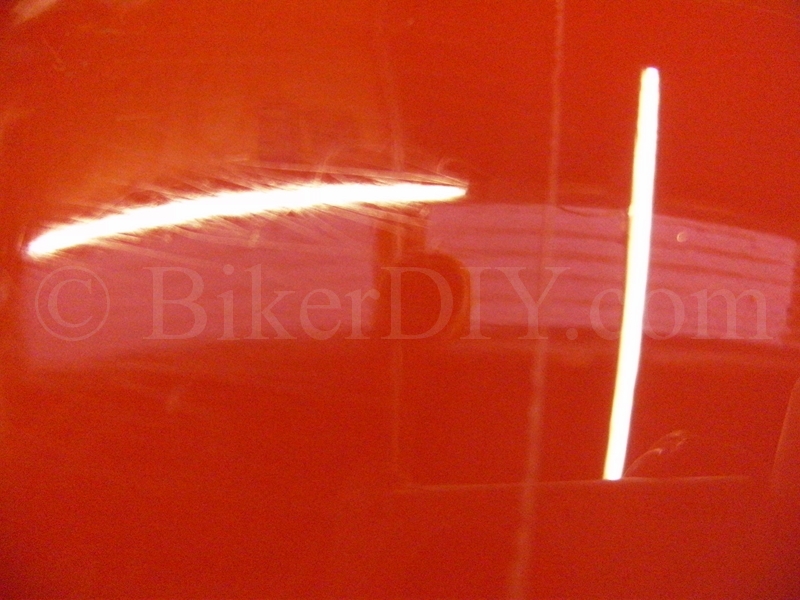 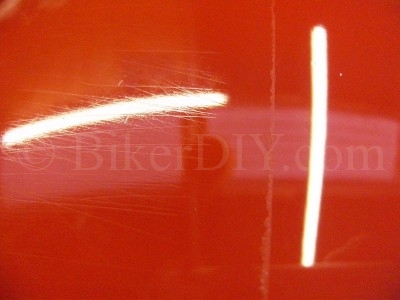 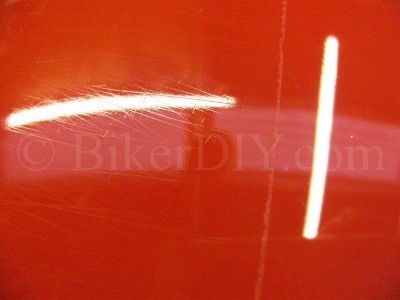 At this point with the effectiveness of Meguiares UC demonstrated I removed the tape and set too on the entire tank with the machine, and also the frame and plastics of the bike by manual applicator. When I couldn’t detect any improvement in the finish after a pass I stopped with the Ultimate compound. I wiped down the tank with a 10% solution of Isopropyl alcohol (isopropanol) and water to make sure all of the compound was gone (another tip from my buddy) and I then used Meguiares Ultimate polish to help fill in the remaining fine scratches and on top of this I put Meguiares Ultimate Wax for final protection.

It’s really starting to read like an advert now LOL.  But in the end the tank went from this… 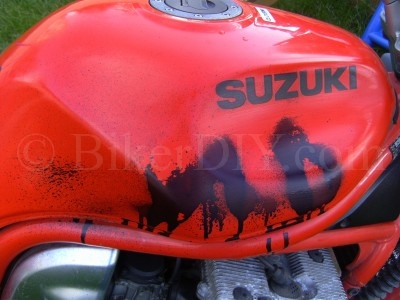 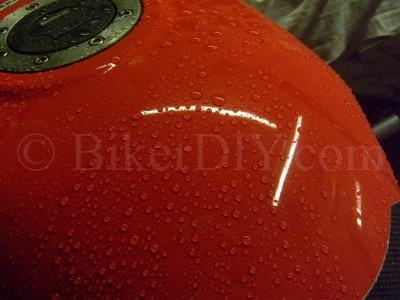 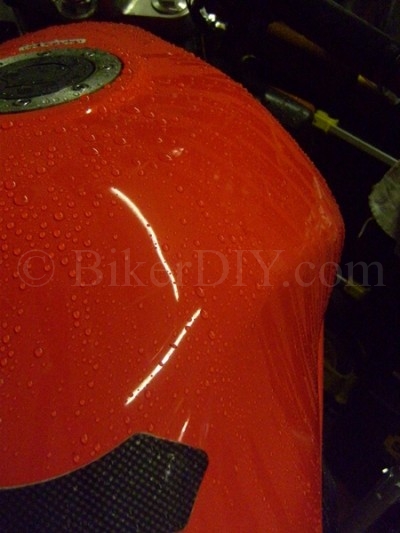 And that puts a big old smile on my face on a regular basis. Not too bad for 14 year old paint and not insignificant hours of labour.

The plastic airbox cover by the way, had a lucky escape as the added paint didn’t bond at all to the coating and it came of with a rigorous wash. Luckily the cover on this generation of Bandit 600 had a matt silver finish and not the shiny chrome like finish of some later models which probably would have been much less forgiving of the paint and the rigorous washing.

Unfortunately it appears that even Meg’ UC couldn’t help with the slightly pink tail on the bike as it would seem that it isn’t caused by oxidised top coat and I’m guessing may be a breakdown of the pigment itself in the paint as I have compounded it as much as I dare and turned pads pink in the process but it has had no detectable impact on the pink area of the paint. I continue to search for a fix short of a respray.

LOL) but I think you would have to agree the stuff I used did a great job.

2 Responses to “Saving the Bandits paint work, compounding and polishing.”